Christina María Aguilera (born December 18, 1980) is an American singer, songwriter, actress and television personality. Born in Staten Island, New York and raised in Rochester and Wexford, Pennsylvania, she appeared on the television series Star Search and The Mickey Mouse Club in her early years. After recording “Reflection”, the theme for Disney’s 1998 film Mulan, Aguilera signed with RCA Records. She rose to prominence with her 1999 self-titled debut album that spawned the Billboard Hot 100 number-one singles “Genie in a Bottle”, “What a Girl Wants”, and “Come On Over Baby (All I Want Is You)”. The following year, Aguilera released two studio albums; the Spanish-language album Mi Reflejo and the holiday album My Kind of Christmas.

She assumed creative control for her fourth studio album, Stripped (2002), which produced “Dirrty”, “Beautiful”, and “Fighter”. Aguilera’s fifth studio album, Back to Basics (2006), debuted at number one on the album charts of ten countries and spawned the tracks “Ain’t No Other Man” and “Hurt”. In 2010, Aguilera released her sixth studio album Bionic and starred in the film Burlesque. The following year, she debuted as a coach on the reality competition television series The Voice; she has since appeared on six of its twelve seasons. Her seventh studio album, Lotus, was released in 2012. Aguilera has also been featured on several successful collaborations during her career, including “Lady Marmalade”, “Moves like Jagger”, and “Say Something”.

Aguilera has been recognized as a pop icon and earned the title “Pop Princess” in her early years. Her work has earned her five Grammy Awards, one Latin Grammy Award, and a star on the Hollywood Walk of Fame. She has sold over 17.9 million albums in the United States as of 2014 and 50 million albums worldwide as of 2015] In 2009, she ranked at number 58 on Rolling Stone’s list of 100 Greatest Singers of All Time, thereby becoming the youngest and the only artist under 30 to be named. Billboard recognized her as the 20th most successful artist of the 2000s, and Time listed Aguilera among the top 100 Most Influential People in the World of 2013. Aside from her work in the entertainment industry, Aguilera is involved in charitable activities through human rights, world issues, and her work as a UN ambassador for the World Food Programme.

Loved lotus! It was highly underrated. 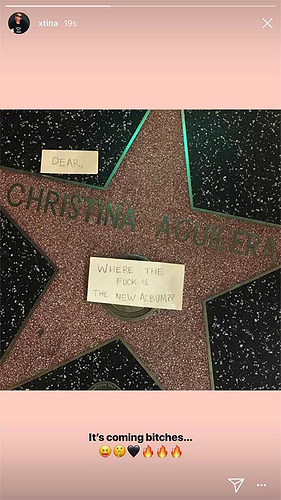 It would be iconic if we got the album this year but I really truly have no hope whatsoever.

wow no one has even bothered to post about how Our Lord and Savior is FINALLY posting teasers on instagram, she’s most likely dropping the lead this week

I SO hope to get STRIPPED quality tracks but I doubt it.

I came a load in my pants just imagining a Get Mine, Get Yours or Walk Away level song on this album Christina Aguilera Down for a 'Mickey Mouse Club' Reunion (Exclusive)

ET caught up with the singer before her 'Liberation' tour show in Los Angeles over the weekend.

Hmm… this would be interesting. I’m down!