Thursday Jan 25 at 8/7c on VH1​
Also, for UK fish, the season will be airing on Comedy Central on Saturdays I believe.
source: the official twitter account

God I am OBSCENELY excited for this. Not getting to see Trixie in the Snatch Game her first go around was kinda upsetting, so I’m incredibly excited to see what she’s gonna bring to the table. I’m hella rooting for Trixie to snatch this crown.

I’m so excited for Milk and Morgan.

The first looks of the entrances are going around all major news sites. There are also individual pictures of each queen which a quick google search can find. The tenth queen still hasn’t officially been revealed, but the fans do know who it is (I won’t post any spoilers, don’t worry lol). We also know that the first challenge is a Talent Show in which Chi Chi does a dancing number with a baton. I posted the pictures in a spoiler below incase anybody didn’t want to see them. Trixie rollerskating in though, I CAN’T I watched the first 15 minutes and (even though we know who the 10th queen is) I’M SO GAGGED. The premiere couldn’t come soon enough!

Also, I’m not really here for all the young fans already coming for the “shady confessionals” (Milk, Morgan etc). They weren’t even that shady???

The new fans of the show are the worst! I’m afraid for Morgan who likes to keep it real, I’m not sure how the new fans will “handle” her. Personally, I think it makes great TV but the “fans” are one of the reasons why the girls play “nice” nowadays, like it’s drag, relax sis!

I thought Ben’s whole “I have no f*cks to give” attitude was gonna be her motto but her introduction and interactions during the First Look were… same ol’ thang. I agree with Morgan.
By the way, I LOVE Morgan’s bluntness.
… and I still don’t know what Aja’s doing there… Is she gonna be all bitter and jealous of someone else to become meme-able again? She kinda doesn’t stand a chance against any of the other queens - I mean, you got awesome dancers, you got kooky queens, funny queens… where does Aja land? I mean I’m sure I’m gonna change my mind if she’s improved, but for now… I feel she’s either gonna go unnoticed until there are no more queens fucking it up and ending up in the bottom instead of her or she’s going home first (somebody has to, right?)…
I loved most of the entrance looks… except Aja (unpolished for an All-Star) and Shangela (cute and unclockable make-up but the rest is like… “meh”).
Agh, can’t wait for this to finally start!!

I actually love Aja this season. Have you seen her looks for “promo week”? This last week or so, she has been turning out flawless looks left, right and centre and I really hope she serves looks on AS.

As for first outs, I would assume Milk (even though I love her) would be the first out? The first episode is a Talent Show so what would she do? I guess we’re gonna have to wait and see.

Everybody in the topic should post a ranking of the queens before the season airs, and then you can check back after the season airs to see if it has changed in anyway.

It’s pretty evident that I’m really not a Kennedy/Thorgy stan. The rest of them are pretty great though.

Yeah I can’t stan(d) Kennedy, either. I mean she can dance and perform… but her whole attitude both in S7 and during the press (especially during the BUILD series interview where she hogged the mic for most of it) just doesn’t make me relate to her! And I agree, Aja’s looks during interviews and stuff have improved from S9… but that’s not saying much… I mean, we’ve all seen her S9 looks.
Maybe if Ru pulls a Halleloo and bring her back for yet a third time in like AS4 I could get behind her - for now I’m not completely sold.

… umh, a ranking of eliminations or a personal ranking of preference?.. I’ll do both.

From most to least favorite:

… also, who the hell is the 10º queen? Is it really Bebe Zahara Benet?

My ranking from favorite to least favorite:

As far as reddit fish know, that is who the tenth queen is.

The episode was AMAZING!!!

MILK is absolutely EVERYTHING to me right now, LOVED her entrance look (hi Pinocchio, again!) and I think she did a great job at the talent show, she implemented fashion in a very cool and milky way. Enough about MILK!

Aja was really good too surprisingly, I didn’t expect to enjoy her as much as I did, her performance was easily the best imo hands down. BenDeLaCreme’s number was real fun and unique, I enjoyed it very much. Shangela’s number was good but I feel like we had already seen it in some season finale pre-show. Thorgy’s was cool. Trixie’s was cute. Chi Chi girl, damn that was hard to watch. Kennedy was also good, those moves!

Out of the top two, Ben definitely rocked the house down, I was laughing my ass off, she was so funny, a very well deserved victory. Sad to see Morgan gone so early but what can you expect with a mouth like that, not everyone can handle honesty like she can but still such a shame, I don’t think the show will do much for her like it did for Tatianna, plus she’s not as likeable as Tati but still it was sad to see her go this early, perchedT for the revenge tho.

And I don’t mind Bebe being the 10th contestant, I mean she deserves the chance and spotlight since her season was ages ago but sadly, I don’t think she can offer much? Like Phi Phi said last season, she’s from the old school of drag and I don’t think she can bring something new or refreshing to the table but that’s just my opinion and I’m ready to be proven wrong. Overall, great episode, can’t wait for the next one already!

The episode was SO enjoyable to watch.
I don’t know how much to spoiler so I’ll just spoiler all my thoughts.

Aja came to SLAY on that premiere episode. Her routine was the best performance of the night, and she actually outperformed Ben in the LSFYL, but I get that the judges love a comedic LSFYL, hence their decision to go with Ben as the winner of the week.

I’m annoyed/disappointed that Ben chose Morgan to leave, despite having expected it from the moment Morgan revealed his strategy. I really thought Morgan had a lot more to offer, and Chi Chi’s routine was so hard to watch. I also don’t like that Ben didn’t agree with Morgan’s strategy, yet used that exact strategy himself? He didn’t “go with the judges critiques” despite saying that the whole group agreed on that. By the judges critiques, Chi Chi was definitely the worst?

I’m very excited to see the Revenge of the Eliminated Queens episode. I really think (depending on who gets eliminated in the coming weeks) that Morgan has a strong chance of returning.

So far, Milk has disappointed me and I really hate to say that because I am SUCH a stan of her. Bebe returning is not the best thing in the world, but I’m not ultra-bothered by it. Shangela slayed the house down. Trixie was great, but it wasn’t the best of the night by any means. Thorgy was impressive, but I’m seeing a lot of ‘classical music fans’ saying that Thorgy was almost below average in terms of technicality, pitch etc, I thought she did well though. Kennedy was also quite impressive.

What do y’all think?

Also, regarding the Next Episode trailer:

It looks like we’re getting a “Recreate A Look From Your Season” Runway! I’m fucking shook because I was GAGGGGGGGGING to see a updated Aja/Disastah look. They showed it in the trailer and I’m obsessed!
It also looks like Milk will be recreating her “Pregnant Woman” look, and Trixie will be doing the “Born Naked” runway. 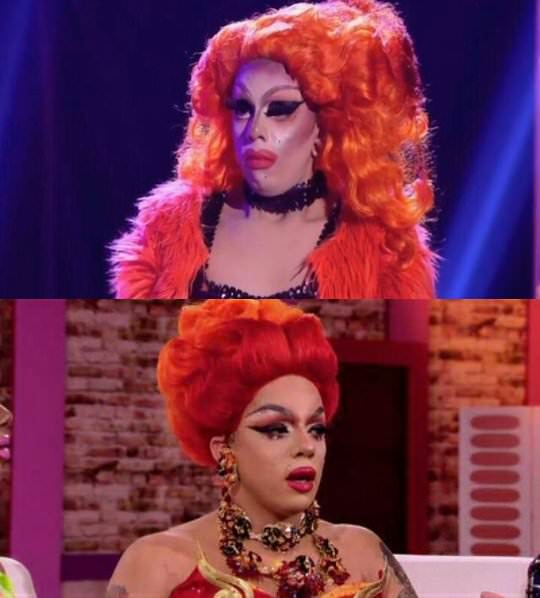 Totally fucking missed this. Will try to watch tonight, and post my feelings via-spoiler!

GIRL, AJA snatched my fucking wig this episode. That talent showcase was EVERYTHING.
I loved Thorgy and how in the extra scenes on YT she revealed some bitches said they expected her to be on the bottom. Drama is already brewing and I’m sure Thorgy’s gonna be a huge part of it. I loved the violin part - even more than I expected.
… was I the only one kinda dissappointed on Trixie and Milk? Trixie’s was cute but not memorable and Milk… was kinda funny, but way too corny to be “you’re safe” funny. Hell, I’d traded Morgan for Milk for their performances last night.
I hated seeing Morgan go. Chi Chi’s number kinda sucked, and the outfit was so forgettable I was sure she was gonna be the first one to be gone.
And Bebe’s reveal was so… ugh. I mean I get it, she can showcase her talent and all that but, like Morgan said, there are like 110+ queens and they bring back a winner? Come on, mama Ru, you know better than that!..

Can’t wait for the next episode!

I’m excited to see where the show goes from here, but as of right now - I’m not really enjoying how they’re pretty much doing the EXACT same thing as they did last year. The queens eliminating each other might fair better this season since Rolaskatox isn’t there, but the Ruvenge thing again? Gosh.

I was fairly impressed with almost everyone during the talent show. I’m not surprised with the bottom two, because their performances were the hardest to watch, but the wrong queen went home. That’s the tea on that.

Aja surprised me. Trixie made me happy.

And that 10th queen? Really? I agree with @Anhell. Come on Mama Ru. You could’ve done waaaaay better.
But at least it isn’t Valentina.

The new season is really good, I like it because there’s no clear winner for me, as past seasons have made it obvious, and where tailor made for certain queens to win. (so far) But none of these girls are Drama. The growth form Aja is almost made up. She still looks like a cheap messy queen, not an All Star. I wouldn’t have cast Kennedy either, it almost feels shady to say she’s worthy. Her look was just what Trixie said, white noise of ugly.